Found and appropriated photographs from the internet are the basis of Thomas Galler's work Bright Star. 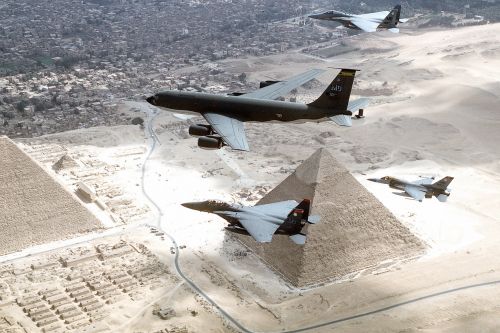 Found and appropriated photographs from the internet are the basis of Thomas Galler's work Bright Star. The photographs of Egyptian and American fighter jets and helicopters in the area of the Pyramids of Giza were first produced in December 2010 in the form of a 10-piece postcard set in Cairo and circulated through souvenir shops and the Cairo Documenta just a few weeks before the Egyptian revolution. With the postcard as an image carrier, the information content of the depicted is turned into a touristic-commercial one; the military propaganda machine of Egypt and the United States are presented and ironically reflected. By recycling the images and the conversion into a different context, Galler opens up new contexts. He refers to the instrumentalization of images and the consequent control over the production of meaning.