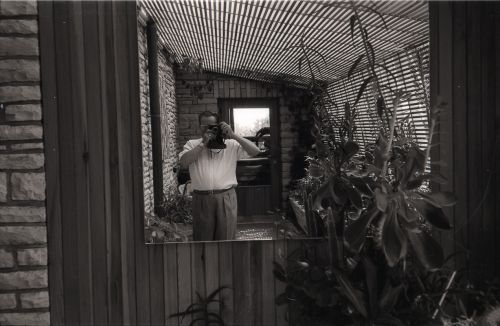 In the Second World War, Josip Broz Tito (1892-1980), led the communist partisans against the German and Italian occupiers, the fascist Ustashe and the royalist Chetniks. After the war he became first premier (1945-53) and finally president of Yugoslavia (1953-80). In state controlled rituals he was celebrated and honoured as the hero of a national myth. Cities, streets and public buildings were named after him, his image was printed on banknotes and hung in private houses, schools and businesses. With this, for dictatorships typical propaganda, instrumentalized personality cult, it is unusual that Tito photographed himself. On his trips and at official events he insisted on taking his own photos, or like here in his private sunroom, even made a self-portrait. In this way, he used the medium of self-reflection and reassurance with its long tradition in art-history and which, since many years, circulates through the social media as the selfie and today sheds light on the omnipresence of the self-staging individual.